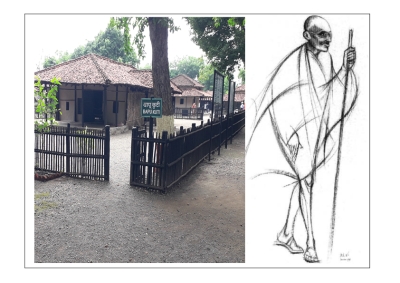 PROGRAMME AT A GLANCE

Morning : Arrival around 10 am and Rest

Afternoon : Visits to Magan Sangrahalaya, Wardha (Museum Founded by Gandhi) and Laksmi Narayan Mandir, Wardha (First Temple opened to the Untouchables in 1928 by the initiative of Jamnalal Bajaj and Vinoba Bhave).

Sevagram Ashram Pratishthan India and Gandhi International, France, in cooperation with the Community of Ark, France.

Following are some of the themes suggested for discussion and deliberation in the Symposium:

Towards a New World Order

The themes suggested for the symposium are indicative. The participants are requested to prepare papers on suggested or related themes. It will help the organizers to plan the various sessions of the symposium.

The delegates are requested to prepare papers on broad themes or related areas. The word limit for the papers is 6000 – 8000 words. Papers will be circulated to participants in advance to initiate discussion in the symposium. The name of the author, institutional affiliation and complete address including email should be supplied. We request the delegates to use Chicago Manual of style for referencing. All submissions are to be made electronically in the form of email attachments processed in MS word and should be addressed to Dr. Siby K. Joseph Email Cette adresse e-mail est protégée contre les robots spammeurs. Vous devez activer le JavaScript pour la visualiser.

N. B. : Those who are preparing Papers in French and other languages are requested to prepare an English version. The last date for subsmission of papers is January, 15th, 2023.

Location of Sevagram Ashram
Sevagram is connected by two railway stations viz. Sevagram and Wardha Junction. The Ashramis situated about 6.8 kms and 9.1 kms respectively from these railway stations.The nearest city is Nagpur. It has an international airport. The distance between Nagpur to the Ashram is about 80 kms.

Second Part of the Symposium


February 2, 2023 : Departure from Sevagram to Aurangabad by train.

February 5, 2023 : Departure from Aurangabad to Ahmedabad.

Third Part of the Symposium

Afternoon : Visit to the campus of Gujarat Vidyapith.

Sevagram is the fourth ashram established by Mahatma Gandhi. The word Sevagram literally means the village of service. The first two ashrams or experimental communities were established in South Africa in 1904 and 1910 respectively. His third ashram, which is known asSatyagraha Ashram, was established at Kochrab near Ahmedabad in 1915 and shifted to the banks of river Sabarmati in 1917. Mahatma left this ashram on 12 th March 1930 in the wake ofhistorical Salt March with a solemn vow that he will return to the Ashram only when India gets independence from the British rule. Mahatma made the village Segaon, about four miles to the east of Wardhatown Segaon, as his home on April 30, 1936. Later this village was renamed as Sevagram. This ashram is considered as the culmination of his experiments in Ashrams. The ashram witnessed many important meetings and discussions which determined the future of India. The idea of Quit India movement took its shape in the first meeting held here. Similarly the preliminary deliberations of Individual Satyagraha were also held here. Sevagram ashram declares to the world the values of simplicity, limitation of wants and life in tune with nature. It continues to remain as a source of inspiration for ordinary people to noted philosophers and thinkers.

Sri Jamnalal Bajaj Memorial Library and Research Centre is instrumental in coordinating the programme. The Sevagram Ashram Pratishthan began the work of the research centre and allied activities from April 2021. The main objective of the centre is to identify the growing relevance of Gandhi and the need for providing opportunities for study, research and application of his thoughts and methods. The centre within a short span of its existence established its identity among academics and activists both nationally and internationally by organizing a number of programmes in collaboration with different universities of India and other reputed institutions.

Gandhi International is a French NGO which brings together motivated individuals and various nonviolent organizations working for social change in the cause of justice and peace. Its aim is to promote renewed interest in Gandhian Thought and action throughout Europe and other continents, by organizing cultural events, conferences and symbolic acts. It published a number of books in French and English.Gandhi International was awarded the 2008 Maja Koene prize from the CESCI Foundation (India and Switzerland ) for the dissemination of peace and nonviolence. Louis Campana, founder President of the Gandhi International is a direct disciple of Lanza del Vasto who founded the Communities of Ark in France and other countries. He was awarded the prestigious Jamnalal Bajaj International award for outstanding contribution in Promoting Gandhian Values India . The headquarters Gandhi International is at 37, Rue De La Concorde11000 Carcassonne, France.

“In a gentle way, you can shake the world.” With this philosophy and ideology of Mahatma Gandhi, MGM established an educational trust in 1982 under the guidance of former Education Minister Shri Kamalkishore Kadam and a group of founder members who are hard-core academicians and visionaries. The Trust established its pioneering institute in the historical city of Aurangabad, home to the heritage sites of Ajanta & Ellora but lacking in premiere educational institutes. For more than four decades, Mahatma Gandhi Mission has blazed a trail of academic excellence and state-of-the-art health care services.

Gujarat Vidyapith was founded by Mahatma Gandhi on 18th October, 1920. Gujarat Vidyapith is a deemed university since 1963. It was started as Rashtriya Vidyapith (National Institute of University Education) and was the wake of the Non-cooperative Movement. Mahatma Gandhi remained its life-long Chancellor. The Institute imparts higher education with an integrated system of education teaching from the Nursery to the Doctorate level. The main objective is to prepare workers of character, ability, culture and dedication for the conduct of movements connected with the regeneration of country in accordance with the ideals given by Mahatma Gandhi.

This page is also available in French

If you would like to have a virtual tour of Mahatma Gandhi Ashram at Sevagram, please visit the website of the Ashram and click on Virtual Tour : https://sevagramashram.org.in