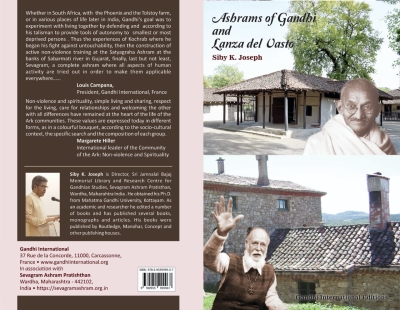 The book Ashrams of Gandhi and Lanza del Vasto written by Siby K. Joseph, Director, Sri Jamnalal Bajaj Memorial Library and Research Centre for Gandhian Studies, Sevagram Ashram Pratishthan, Wardha throws light on ashram experiments and constructive activities undertaken by Mahatma starting from Phoenix Settlement, Tolstoy Farm in South Africa to Satyagraha Ashrams at Kochrab and Sabarmati Ashrams in Ahmedabad and finally at Sevagram Ashram in  Wardha. In addition it discusses the Community of Ark of Lanza del Vasto, salient features of the community life of Ark. It also carries a chapter written by Margarete Hiller, currently serving as the international leader of the Community of the Ark: Non-violence and Spirituality on the theme the Ark Communities today.  The book inter alia discusses the significance of Gandhi’s Ashrams for posterity, basic education as an outcome of Gandhi’s experiments in Ashrams, Rules and Discipline of Ashrams, the evolution of Mohandas to Mahatma through ashram experiments and the demand for World Heritage Status to ashrams. In the appendices the Prayer of Sevagram Ashram, Common Prayers of the Ark and photos of Ashrams of Gandhi and Lanza del Vasto are included.
Louis Campana President, Gandhi International, France wrote the foreword of the book.